How important is wind power in the UK?

Are you ready for a Green New Deal? We are!

Our commitment to green energy is matched only by that of the suppliers we compare. Call us to choose and switch to the one that best fits your needs.
Monday to Friday – 8.30 am to 5.30 pm

papernest is rated 4.7/5 on Trustpilot
Ad

Are you ready for a Green New Deal? We are!

Our commitment to green energy is matched only by that of the suppliers we compare. Call us to choose and switch to the one that best fits your needs.
Monday to Friday – 8.30 am to 5.30 pm

papernest is rated 4.7/5 on Trustpilot
Ad

Wind power is a sustainable and environmentally friendly way of generating electricity. In the UK, the use of wind power and other types of green energy has grown considerably over the past few years and it now accounts for a considerable proportion of our electricity supply. In 2019, wind turbines became the country’s second source of electricity with a total production of 64 TWh. In this post, we’ll take a closer look at the importance of wind power in the UK and find out if you can benefit from installing a wind turbine on your property.
Last update: June 2022

As you may have heard on the news, the UK energy market is currently under an immense amount of stress as a result of a global gas shortage driving up costs and putting several energy suppliers out of business. To learn more about this and stay updated on a daily basis you can read our page on the UK energy crisis. 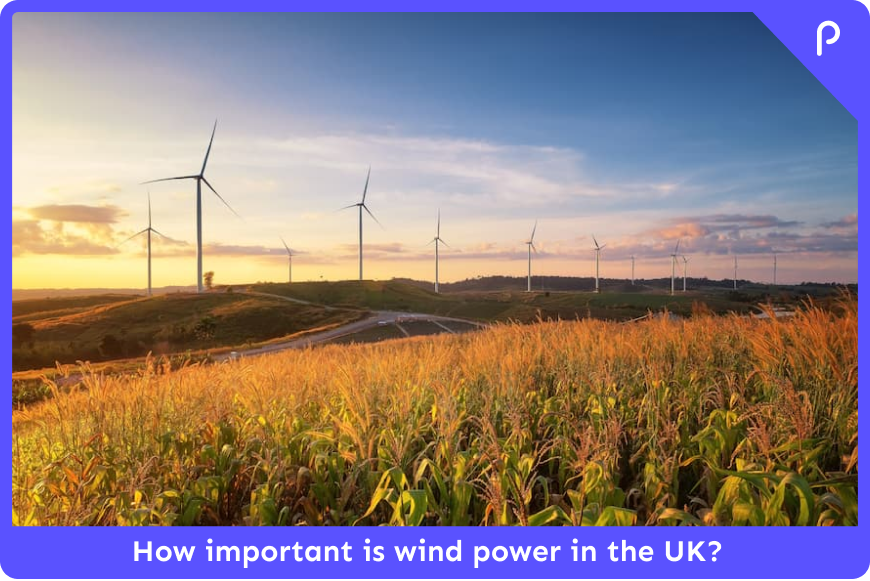 Most of the wind energy we consume in the UK comes from onshore farms. There is also a growing number of offshore farms. These are located in the shallow coastal waters off of England, Scotland and WalesAs well as large, commercial on and offshore farms, the UK produces electricity from small, domestic turbines.

Wind power in the UK

Wind power is a very important part of the UK’s electricity generation system. It’s estimated that around 40% of the wind that hits Europe goes through us first. This makes Britain the perfect place for both on and offshore wind turbines.
In 2010, the UK’s total wind capacity was 5.4 GW. Over the past 10 years, this capacity has more than quadrupled to 24 GW. In 2019, wind generators became the UK’s second largest source of electricity, providing a whopping 64 TWh. That accounted for almost one fifth of the UK’s total electricity generation
The government recently announced a new £60 million investment in upgrading the country’s offshore wind capacity. This will raise the target production from 30GW to 40GW by 2030. If this target is achieved, it would see the UK generate enough electricity from offshore wind to power every single home in the country.
This rapid growth in the capacity and production of wind power in the UK shows just how important sustainable energy is to the country’s infrastructure. If these targets are hit, it will mean that the UK is no longer reliant on fossil fuels for its electricity and it should go a long way towards helping the country achieve its CO2 emission goals.

What are the pros and cons of wind power?

The UK is currently investing a lot of money and resources into both on and offshore wind power. Already, around 20% of the electricity you use at home comes from wind turbines.
Although most people agree that wind power is good for the environment and good for the economy, there are always negatives with any new technology. Understanding the pros and cons of this sustainable energy should give you a better appreciation of the power of wind and give you a clearer idea of the future of wind turbines in the UK.

Are wind turbines cost effective in the UK?

Although construction and installation costs can be high, overall, wind turbines still offer excellent value for money. Onshore farms in particular are very cost effective as they are cheaper to build and easier to maintain than offshore turbines.
In fact, onshore wind is the most cost effective choice for new electricity generation in the UK, bar none. Cheaper than nuclear, coal, gas and other renewables, onshore wind farms allow us to produce green energy cheaply and efficiently.
Offshore wind, although not quite as cost effective as onshore turbines, still offers good value for money. Since 2015, improvements in technology have reduced the cost of new offshore wind farms by an incredible 50%. This makes offshore wind one of the cheapest options for new electricity generation, less expensive than both gas and nuclear.

The majority of energy companies in the UK use the standard fuel mix supplied by the National Grid. This is:

As you can see from the table, Ecotricity uses by far the most wind power of these UK energy companies, with almost 100% of its electricity coming from on and offshore turbines. A number of other suppliers, like Tonik, Good Energy and Pure Planet, also get a high proportion of their electricity from wind power, with the rest a mixture of biomass, solar and hydro power.

Our energy experts are here to help

As well as large scale on and offshore wind farms, the UK is home to a large number of private wind turbines. These are often located in gardens and on small areas of farmland. They are generally designed to help homeowners lower their personal energy bills and make money by selling excess power back to the National Grid.
If you have a large garden or an unused piece of land, and live in a windy part of the country, you may well be considering installing a wind turbine of your own. Weighing up the pros and cons of a home wind turbine should help you to decide if this sustainable solution is right for you.

Pros and cons of a private wind turbine?

Are home wind turbines worth it?

For many homeowners, the main disadvantage of a home wind turbine is the upfront cost. Coming right at the start of your sustainable energy project, before you have the chance to reap the rewards of your renewable electricity installation, this cost can put a lot of people off of investing in a home wind turbine.
The exact cost of a wind turbine will vary depending on the size and quality of the installation you choose, however, all available options require significant investment.

A stand alone 2.5kW system can easily cost between £9,900 and £19,000. If you want to go for a bigger system, a 6.5kW turbine will easily set you back between £21,000 and £30,000.
The average household uses around 4kW of energy per year. So if you opted for a smaller turbine, you’d probably still have to buy some of your electricity from the National Grid.

If you’re looking for a more affordable option, a roof mounted turbine could be the perfect choice. These smaller systems vary in power from around 0.5kW to 2.5kW making them ideal for households that want to supplement their energy supply.
The average cost of a roof mounted wind turbine is around £2,000.

Like all energy infrastructure, your wind turbine will need to be maintained on a regular basis. Average maintenance costs for home turbines are around £100 – £200 per year.

So is it worth it?

Despite the relatively high installation cost of home wind turbines, they are often worth the investment in the long run. Most turbines have a lifespan of 20-25 years. This means that there is plenty of time for them to recoup their costs and bring a net benefit to your finances.

How long does a wind turbine take to pay for itself?

As wind turbines have high initial purchase and installation costs, a lot of people are unsure whether or not they’re really worth the investment.
Wind turbines produce no greenhouse gas emissions during their operation. On average, it takes a commercial turbine just three to six months to produce the amount of energy that goes into its manufacture, installation, operation, maintenance and decommissioning.
Considering commercial turbines last for up to 25 years, this gives them almost a quarter of a century to contribute to renewable energy and low emissions after they’ve paid for themselves.
The time it takes for a domestic turbine to pay for itself is a little harder to calculate. The exact amount you’ll make from your turbine will vary depending on its size, the amount of wind it receives and your household’s level of electricity consumption. This makes it difficult to say exactly how long it will be until you begin to profit from your wind power installation. 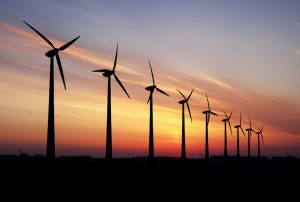 In 2020, the government announced that it would be subsidising onshore wind farms for the first time since 2015. This has led to a significant increase in the number of farms planned for the UK.
The UK government hopes that subsidising onshore wind farms will help the country to achieve its renewable energy goals. Plus, the more electricity we produce from wind and other renewable sources, the less reliant the UK will be on fossil fuel imports from other countries.

At the moment, there are no national grant schemes available to help with the cost of wind turbine installation. However, new grants are occasionally on offer, so it’s well worth checking what’s available when you’re about to buy.
Once your wind turbine is installed, you’ll be able to sign up to the Smart Export Guarantee. This will allow you to earn money for the renewable energy you export back to the grid. This scheme replaced the Feed-in Tariff scheme which came to an end in 2019.

Would you like to know more about green energy? Great! Check out these related articles

Call us to switch your energy supplier for free!

How much does wind power contribute to the UK’s energy supply?

The capacity of the UK’s on and offshore wind farms is constantly increasing. In 2010, the UK’s total wind capacity was 5.4 GW. Over the past 10 years, this capacity more than quadrupled to 24 GW, allowing the country to generate an incredible 20% of its electricity needs from wind power alone.
Over the next 10 years, it’s hoped that further investment will help to boost capacity even more. Some experts predict that, by 2030, we could be producing virtually all of our electricity from on and offshore wind turbines.

How much does a wind turbine cost UK?

The cost of a home wind turbine will vary according to its size and location. A roof mounted turbine will cost an average of £2,000 to install. This is generally the most affordable option for homeowners.
Free-standing turbines are more powerful but more expensive. A 2.5kW system will cost between £9,900 and £19,000. While a larger, 6.5kW system can easily cost up to £30,000.

At the moment, there are four offshore wind farms under construction in the UK. Two are off of the coast of England, and two off of the coast of Scotland. All four projects are scheduled for completion between 2021 and 2023.
In 2019, there were just 23 new onshore wind farm projects in development. That was down from a high of 405 in 2014. This dramatic drop was largely down to a significant reduction in the government subsidies available for renewable energy projects.

How do I get a wind turbine on my land?

There are a number of ways to get a wind turbine on your land. If you have a large amount of land, you can lease your fields to a renewable energy generation company. They will rent the property from you and pay to install and maintain the turbines.
If you want a turbine to power your own property, or if you want to profit from selling excess energy back to the grid, you’ll need to buy the wind turbine yourself. Roof mounted and stand-alone wind turbines are available from a number of manufacturers in the UK.